My Mom died of Alzheimer’s. We found out she had it when she called from Utah on a solo driving trip from Washington State to Fort Collins for her 50th college reunion. She was in her late ’70‘s. I flew from California in the night and got her out of psych lock-up in Provo, drove her back to Washington where my brother and I took over her life and she became institutionalized. During that two-day drive, I didn’t have time to wonder what state of mind she was in, being busy staying awake and keeping her from wandering away when we stopped. She was not in the same “present” I was. Later I wanted to feel her during that ride and wrote this. 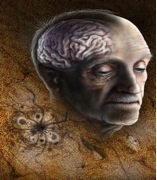 They Took My Car Away

I stopped to wait for my brother. He’d be out in just a minute, I told the man. I was just waiting there for him to come out, and then we’d go. I didn’t want to be late, but they wouldn’t let me be. I rode in the back while the other man drove my car. I didn’t want to go and I didn’t want them to drive my car and I said so, and they were very nice but they must not have been from around here or they’d have known who I was. I asked them if they were Aggies too but they said no. I have to get to my reunion, I told the man. It’s in Fort Collins and I just need to get back in my car and keep going so I get there on time, but he just smiled and said not to worry. The man asked me where I was from and something about Washington plates, but he must have been confused. I said over by the golf course, you know just up off the avenue and did he know Shirley and Bob Fisher? He must know them. They live up there too. Shirley had surgery but she was doing well and Bob sold the pharmacy and the Stewarts and Prestons moved away but into a very nice community, but I couldn’t remember where it was. They gave me a nice room but I said I had to keep driving and I couldn’t stay but I fell asleep after the nurse came.

My oldest doesn’t come around much anymore, but he was there when I woke up and we left in my car. I was glad to get away from that place and what they did there I won’t even tell you. He wouldn’t let me drive and I wasn’t sure it was him sometimes because he asked me odd questions but he kept driving and I was happy for that since we were on our way to Colorado again. The woman in the back seat wouldn’t be quiet and I turned to tell her to pipe down but sometimes she’d leave, but then she’d be back there again, telling me all about her kids and her husband and what a good golfer she was and I just wanted to slap her. I’d never seen her in town before. She’s probably one of the new ones from Pasco.

Of course I knew where we were. I’ve driven all these roads before he was born and a trip from Washington to Colorado is like driving to Richland. You just go to Boise and then Cheyenne and then right on down to home. Who does he think he is? Mother and Dad drove all these roads too and they knew every motel and diner and they’d been to every park and I used to go with them. In the summertime we’d picnic up in Estes Park. And I’m sure this one’s not coming to the reunion with me, with that beard. I wish the other one were here. He comes home and he helps me with things and his friends are very nice. I wish he would let me drive. He’s always driven too fast and several times we almost hit something in the road that had bright flashing lights that moved back and forth and I had to reach over and steer so we didn’t crash. Whenever I did that he’d stop and we’d talk and he’d say not to do that and that it was going to be alright and of course it was alright, just so we get to the reunion on time. That woman in the back seat was laughing and I turned around to glare at her but she’d left again.

I wasn’t very hungry and I didn’t like the eggs and potatoes and when he left I did too because we were running out of time. There were so many cars in the parking lot I walked around and was sure mine was there but none of them would open and he ran out as a couple bumped into me and they didn’t even say excuse me. Another man asked me what I was doing and why I wandered away and I didn’t wander away and didn’t he know I had to keep driving? His face changed then and I reached out to touch it to find out who he was and he was looking at me and crying.

We drove and drove and then slept. Miles of hills and dry rivers. The next day we drove again and I still didn’t see the mountains I grew up in and I thought for sure he’d taken a wrong turn and we were no longer going the right way. All around was desert and flashing lights and faces. We crossed a wide river and the blue of the water was all over the window on my side and I tried to wipe it off but it just got bluer and wetter and I was afraid and I didn’t know where we were or who the man driving was. He stopped two or three times to make phone calls and I hoped he was calling State to say I was on my way, and to go ahead and start the reunion without me anyway.

They both helped me out of my car and I said there’s no need to do that and what are you doing here and this is my car and I’m just fine. Another man was very rude and I just refused to talk to him. I certainly know who the President is and why did he have to ask me such silly questions and he had another think coming if he thought I was going to tell him what year it was or where I live. Why, he was probably a student in one of my classes. I asked him what time it was and he must not have known I had somewhere to be and he kept asking me questions. The boys had left and now there were more people I didn’t know.

I didn’t want a new place to live. Mine was just fine and would they please take me home? I didn’t like the one they chose. Everything was in the wrong places and why in the world did they think I wanted to eat with a group of old biddies like that every day? I tried to find my things and move them to where they used to be but someone always stopped me and they didn’t have good manners about it. And then they moved everything back. Someone had left their cigarettes on the coffee table, but I didn’t know who and why would they do that? Auntie called them “poofs” because that was the sound you made when you blew out the match and Mickey called them “poofs” too. Had they been there?

The boys came and went and seemed very busy and whispered between themselves and I didn’t like that. What were they talking about? I’m their mother and who do they think they are.

I wanted to go home and I left one day and I walked until I was tired and I didn’t recognize anything and a very nice black man took me back to a new place I’d never been before that had someone else’s clothes. And they’d left their cigarettes there.

Two boys were there and it looked like the sun was setting or maybe coming up and they ate but I didn’t, and then the older one hugged me and he was crying and then he left and told me he had to take my car. I was angry and I wouldn’t look at him. I wish he hadn’t taken my car. I’ll never get to the reunion now.