The Most Romantic Speech Ever

If you live in most of America, you say “movies”.

If you took lit classes or worse, film classes in college, you say “films”.

If you live or have ever lived in LA, you say “pictures”. I really like that. I try to say “picture” whenever I can remember.

I don’t think Old Gringo is necessarily excellent in those smug and snotty film-school-student-turned movie-reviewer-for-the-local-weekly ways, but rather a beautiful piece of writing that tells a timeless set of stories, a compelling placement in history I care about, a few really good performances, hope, love, loss, patriotism, anomie and excellent scenery. Sorry: No frontal nudity, special effects or shape shifters.

This film contains my favorite single speech. I love it. I think it’s mischievous, romantic, heartfelt, honest, historical, sad and hopeful. That’s a lot for just a few minutes of monologue. And it was made by a dying old guy to a vital, sexy, young woman.

I want to share it with you. For those who read the Levon Helm thing above, I’ll spare you all the caveats and apologies about transcribing stuff from movies. Hey, it’s my newsletter.

Just some brief background to set up this speech:

Ambrose Bierce was an American writer who covered many of our less noble wars around the turn of the century (that’d be the 19th turning into the 20th centuries for the Gen Y’ers) for the Hearst papers, and wrote a bunch of really good ghost stories as well. A good body of work. 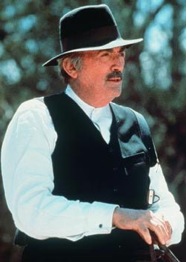 (Gregory Peck as Ambrose Bierce, the Old Gringo. I’d do him. –Ed.)

He leaves academic and journalistic fame in order to wander into the wild and dangerous deserts of Chihuahua to find Pancho Villa, and finally have a chance of dying on the right side of a battle. He’s an old man, seventy or so, beautifully played by Gregory Peck. Fully gray hair and moustache, still wearing his black suit, with a pistol in his waistband and a seeming unquenchable thirst for tequila, though he remains composed always.

Meanwhile, Harriett Winslow (Jane Fonda, to get a visual) has planned to abandon her society mother, with whom she’s been leading the lie of their life, that being that Harriett’s father had died a war hero, killed in Cuba, when in fact, he did fight there, but had left the old battle axe and gone off with someone else. Go figure. This ruse allowed the two to collect benefits and lead a proper DC life, only having to visit Arlington annually in order to keep up appearances.

But Harriett was very dissatisfied with the essential denial in their lives: She had “too much of your father” in her, according to her mother, and she knew she’d become a spinster. She wanted passion and romance and meaning.

Harriett accepts a position as a governess with la familia Miranda, a well-heeled land-owning dynasty in central Mexico, who, unbeknownst to her, have been run off la hacienda by the revolutionaries. Among these rebels we find General Arroyo (played handsomely by Jimmy Smits) who has to face his own demons, having been raised by los Mirandas, and spends much of the film wrestling with the tension between his aristocratic and peasant blood.

Harriett runs into Bierce, naturally. She’s a third his age, proper, hopeful, gullible, inexperienced and stunningly beautiful. They’re both caught up in the siege of la hacienda Miranda.

There’s a lot to tell you about this story and I’m tempted to show off what little I know about symbols and literary devices (how the written word and the papers they’re written onto repeat themselves throughout the story and represent hope, lies and failure for Harriett, Bierce and General Arroyo:

Bierces’s books that he loathes and the newspaper he wrote for and the powerful Hearst family behind it;

The letter that brought Harriett to Mexico, that was a lie itself;

The land deed Arroyo loses his mind over;

The document Villa requires Harriett to sign to avoid an internationl incident, falsifying the details of Bierce’s death and creating the lie that certifies that Bierce’s body is officially her natural fathers, etc.

See, I paid attention in Lit class, but you’d spot me right away as a poseur if I tried to go further, so just watch the movie. I’ll leave the rest of the analysis to Larry.

Anyway, Bierce makes his temporary peace with the revolutionaries, having demonstrated real bravery in the battle. That bravery and camaraderie and esteem, however, get him into trouble, as he boasts to a captured federal officer how General Arroyo will line him up against the wall and execute him, that day, instead of tomorrow.

Of course, el Gringo Viejo himself ends up against the wall, after declining to shoot the federale himself.

But it’s just a trick to scare him, and the jokesters shoot everyone else but him.

Were he not hell-bent on dying “a gringo in Mexico”, or had he been any one of us, he’d have pissed himself. But he didn’t, because he’s Gregory Peck, playing Ambrose Bierce, a tough, resigned, overly verbose, semi-alcoholic, macho writer, and all he needed was a few puffs from his old-time respirator to be back in shape.

Prior to this, Harriett (who was educated and would have know who he was had he given his name or had she recalled his resignation from public life she overheard at what must have been Georgetown) thought him a crude lout, claiming “you say the most terrible things, but in the most eloquent way”.

His near dying evoked her compassion. No small amount of concern for her father is implied.

They walk away together from the crumbling stone wall, in the incendiary, Chihuahuan desert, leaving a dozen bodies slumped and bleeding, and make towards a tiny bit of shade under a tree, sitting on a couple of fallen logs.

Harriett: You are intolerable!

Bierce: Tolerate me. Tolerate me, please. I beg of you. It’s been such a long time since anyone even tried. Oh once, once the women sighed, filled out their chests…how beautiful they were. I thought they’d always be there, sighing into my moustache, admiring my every glance, just waiting for a sign from me.

But they’ve all gone, they didn’t wait. I suppose, I didn’t inspire enough love, in any of them.

Harriett: What, what was it…?

Bierce: What was what?

Harriett: What did you do to make them sigh? I never sighed for a man.

Bierce: Oh, when I was little more than a child, I dreamt I would do things that would change the world, and one night when I was about sixteen, I promised a girl that I would do something grand, something really grand, that would make it impossible for her not to love me, and that afterwards, I would come back to her.

“What is it, exactly, that you would do?” she asked.

I would write the most beautiful poem that anybody had ever written, a poem that would make people cry with happiness, love with desperation, make them feel they understand the meaning of their existence on this earth.

“For how long?” she answered.

Since I was little more than a child and every hour seemed filled with limitless possibilities, I…I told her “just for a short while.”

I wrote for fifty years. I wrote every day of my life, without exception. I wrote and wrote. I wrote during long nights of insomnia. I wrote in foreign countries, in newsrooms, full of enemies. I wrote while my youth drifted by, while love betrayed me.

Many years ago, I forgot her face.

The exact color of her eyes.

The precise line of her mouth.

But today, with my back against that wall, I saw you.

And I knew that you were she.

And that the only place on earth I could have written that poem would have been in your arms.

Oh, my god, how I’m longing to kiss you.

(The old man moves in front of Harriett, kisses her slowly and gently, full on the mouth…after a very long moment, Harriett sighs heavily…)

Bierce: That’s what I did you see, you just sighed.

Harriett blushes, laughs, the strings come up in the background…I cry and laugh, make a note to try to trot this out soon at a dinner with friends…