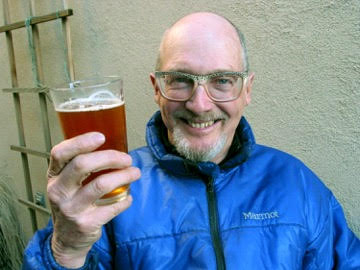 (Editor: I have the pleasure of posting a short piece by my old friend, Bob Woodward. He has been prolific of late, penning these tight little memoir nuggets, so expect a few more. Woody and I likely crossed paths in the middle seventies, when he was the kwisatz haderach of all things cross-country skiing (when there was actually an X-C business in Southern California). Woody is a true renaissance mensch, having been a publisher, writer, photographer, athlete, reporter for several Olympics, the Mayor of Bend and present close to ground zero when mountain bikes became a thing. Today, he holds down the Tourist Free Zone in Bend, as he is doing above. Excellent peepers, as always.)

I was fourteen the summer my father asked me if I’d like to accompany him on a business trip to San Francisco. The caveat being I’d have to take care of myself most days around our hotel or spend time with longtime family friends. At night we’d meet for dinner and then have a walk around the city.

One night our walk took us to dimly lit part of Bush Street with the only illumination coming from a neon sign jutting out from a building reading “Club Hangover”.

“Wait right here.” my father said as he crossed the street and entered the club. A couple of minutes later a door just beyond the club’s main entrance opened and a stocky guy came out and hissed, “psst, hey kid over here.”

I went over and was taken inside and led down a long hallway to a kitchen and then through it up to a table at the far back of a large room with a stage. On the stage was a piano.

Sure enough my father showed up just as someone walked on stage and introduced a pianist named Joe Sullivan. Sullivan played the type of music my father played at home on records -jazz.  When Sullivan finished playing a set and the applause died down, he came and sat down at our table.

There, he and my father ordered scotch on the rocks and talked about the “old days” in Chicago. “Remember seeing Bix at the so and so club” and “how about that speakeasy run by the mob” and more that I really didn’t understand.

It proved to be a foreshadowing of my jazz club hauntings (The Five Spot, Zardi’s ,The Village Vanguard, The London House,  Birdland, The Blackhawk, etc.) years hence.

« Thank you!
Eleven Below »