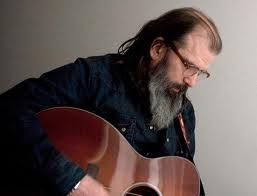 Steve Earle Is My Hero

Sandy and I saw Steve Earle last night at the wonderful Boulder Theater. The show moved me beyond my ability to describe, and stands now as one of the best shows I’ve ever seen by anyone, anywhere. Steve played alone with a couple six-strings, a mandolin, a series of harps and a banjo. Those tools, along with that deeply evocative, gravel-mouthed and road-weary voice, a voice that, like John Hiatt’s, can only be an authentic American one.

Steve picked and strummed, told stories, recognized many of his mentors (Townes Van Zandt, Mance Lipscomb, Woody Guthrie, Pete Seeger, Dylan, Lighnin’ Hopkins and others), neatly disabled an overly zealous fan (“I come from that part of the South where we think it’s rude to interrupt people…”), got us all to sing, harangued us to rise up against the clear and present danger our fragile experiment in democracy faces, and admitted that watching Bush’s State of the Confused speech made him nauseous. If you have the chance to see this tour, I recommend taking it.

Steve paints American pictures and tells American stories like so very few others can. His stories make me cry, regularly. They make me wonder with envy at his significant literary abilities (how can this belligerent, red neck, ex-smacker without a high school diploma have such a highly-evolved grasp of phrasing, timing, rhyme, drama, pathos and just the right word at every turn?). His songs leave me in awe, with a visceral reaction to the music reverberating with echoes and images of Bill Monroe, Leadbelly, Dylan, the Delta, south Texas, Nashville: our country’s richest cultural heritage…that music that came to the hills of the southeast from Ireland and Scotland, arrived on the boats from West Africa, paddled up the river and hitch-hiked the real and mythical highway from New Orleans, transplanted itself into northern Mexico. And now it’s ours and it is most certainly Steve’s. He is one of the living protectors and progenitors of this fragile, sublime, elegant and exquisite inheritance of ours, the music of America.

I’m sure another more qualified and articulate commentator on American culture has already extended Steve this honor, but if not, then I want to be the first. Steve has entered that hallowed fraternity earned only through vision, genius, commitment, pain, love, loss, jail and the road, a family populated in recent years by only Bob Dylan and Bruce Springsteen and a few others: those folk musicians and poets among us who create words and music, rhythm and rhyme, melodic potions and verbal mirages that are uniquely and uncompromisingly American.

Story songs, love songs, angry political songs, and simple pieces that, like a Zen koan or a haiku or a good pesto, expand as you give them time and attention, that open the doors to forgotten rooms in our hearts, reminding us of how truly simple and overwhelmingly complex and poignant human experience is. And how the singer and we are all part of it. Steve’s work can now take its place next to Nebraska and Blood on the Tracks.

This is alchemy of the heart, benevolent wizardry, the ancient role of the wandering minstrel and the court jester. And we have another one in our midst.

Steve now gets to stand next to Bob and Bruce in that role, and alongside Steinbeck, Faulkner, Whitman, Townes, Woody, Willa Cather and the dozens of others who came before. This is a lineage, a seed, the flash point, and Steve has earned his place in it.

That flash point may not be as easily identified among our musical and literary forbears, but that too is so beautifully American: No one person did it. There were masters along Highway 61 and finger magicians in the hills of Appalachia and crazy cowboys in the Hill Country and rhythmic griots in New Orleans and holy hillbillies in Nashville, but this wonderful thing is ours, and any one of us can contribute to and be a guardian warrior of it.

So, with that modest introduction, I hereby exercise my right and my responsibility to confer upon Steve Earle the mantle of American Master, recognizing the living contribution he has made to American culture, a body of writing, playing, singing and telling stretching from Savannah to Austin, from Bayou Teche to the south side of Chicago, from Louis Armstrong’s heart, through Bo Diddley’s to Steve’s and into yours and mine.

Steve Earle is one of my heroes.

I’ve been feeling more and more lately that despite what I see as a dozen good reasons to throw in the towel in the midst of our current and perennial life and death struggle to ensure that America has a fighting chance of living up to it’s potential and to keep the forces of evil, greed, corruption and privilege from completely subverting the Constitution, running roughshod over any country with resources Wall Street needs, ignoring our people in need and raping the wilderness, we all have to keep fighting, and it ain’t over yet.

Steve Earle’s strength, courage and commitment make me want to fight for us.

Heroes and heroines have always been catalysts and created singular opportunities for resistance and revolution, and any of you who’ve seen my home office walls know I value mine highly.

I’ve tended to select heroes from music, literature, religion, social movements and other inspired and inspiring outcasts and misfits, for reasons that may be obvious to many of you, with the predictable outcome. I’m too old to change now.

We need heroes now, maybe more than ever. During a recent concert Steve captured live on Just an American Boy, he introduced a tune about one of his and my heroes by recognizing others of his.

During his fingerpicking intro, he named Pat Leahy, Governor George Ryan, Abbie Hoffman and Joan Baez. Of Joan he said:

“Joan Baez could be in this song. She sang Joe Hill at Woodstock for her husband (David Harris) who was locked up for no other reason than that they couldn’t shut him up and they couldn’t make him kill anybody. She gave him a voice in front of 400,000 people.”

With all credit going to Steve, I’ve transcribed the lyrics to his Christmastime in Washington, which we had the honor of singing with him last night. These words make me cry for our country when I sing them.

and come back Woody Guthrie
come back to us now
tear your eyes from paradise
and rise again somehow.

Steve Earle is my hero because, in the midst of our nationalistic (as distinct from patriotic) hysteria of the past year, he had the clarity of mind and the vision, the courage and the real understanding of what it means to be an American and an artist, to write, perform and then defend his tune ­John Walkers Blues. And defend it he needed to do. This song dared to empathize with a young, misguided kid from Marin who the Bush administration wanted us to demonize and to focus our rage onto and to substitute him for America’s real enemies. Bush couldn’t really go after those enemies, because he and Daddy had been doing business with the Bin Laden clan for years and because our ongoing coziness with the brutal Saudi regime, the real breeding ground for many jihadists is something no American would stand for if we fully understood it.

Junior had arranged for thirty-four members of the Bin Laden family and 116 other rich Saudi’s to be hustled out of the US in the days following 9/11 when even Clinton couldn’t get a flight, without even holding them for a day or two for interrogation.

But the “American Taliban” took the focus away. How neat. How tidy. Steve saw John Walker Lindh as a human being, not a political PR puppet, gave him a voice and told his story.

Artists don’t have much of a choice when it comes to insight and empathy: it’s a gift that is often applied without much bias, and this gift often cannot be “turned off”. Being “open” is unconditional and dangerous.

In times of war or crisis, political leaders have little choice either: their job is to demonize the enemy, make us think he is sub-human, that his acts can only be those of a crazed zealot, or an animal, that he has no understanding of or respect for life or decency. Politicians and warriors cannot allow the thought to enter the dialogue that there may actually be reasons people are so enraged that they do what they do to us.

Steve crossed that line and withstood a barrage of hateful abuse, being accused of anti-Americanism, treason, disrespect and worse. And then he stood up like a man, like a Texan, like a warrior, and took the heat that followed.

I believe the only way to solve conflicts is to be truly willing to understand what the other side is saying and feeling, to listen to their grievances and consider them seriously. There are no animals or sub-humans among us. There are no defective races, religions or ethnic groups. Steve had the courage to see and say it.

Recently he was quoted saying:

“No matter what anybody tells you, it is never, ever unpatriotic to question any fucking thing in a democracy.”

« Pete Seeger and the Commons
The Ship Graveyards of Chittagong »