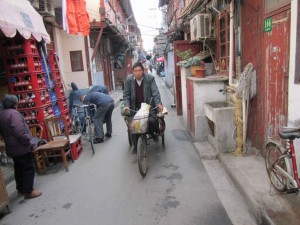 As we arrived in Shanghai today, a colleague from Hong Kong explained to me how Shanghai people and northern Mandarin speakers as a group have “low IQ” because they shout and are generally loud when they speak.

Our host and the Buick mini-van driver, both Shanghai guys, were shouting as we crossed the Hangzhou Bay Bridge, and then again as we entered Shanghai from the south, trying to find my hotel, which is located on one of the best known streets in all Asia. I wasn’t sure what the problem was. I momentarily saw my friends point as these guys seemed to bicker and become quite animated about where to go. I laughed at them and they laughed with me. But then I was reminded of the very ancient north/south rift in China. My friend said Cantonese people were very smart and polite because you can barely hear them when they speak.

Maybe I am a northern guy. I love these rough words and the sound and energy with which they are delivered! I am zeroing in lately, here in the central and northern parts of China, circling an old home, walking backwards into the mist, discovering old memories.

These northern guys get a big belly full of chi and make an almost theatrical voice and go on and on and on, very deep: stentorian and masculine, even the women.
(Secretly I think the south China guys are pansies. Maybe the genetics of this northern Han superiority is in my blood.)
Quiet and demure do not equal smarter.
I should have reminded my pal of all the Canton and Hong Kong hookers who came to Shanghai in the 1800’s, but that would not have been so politic.

I went to the lonely people dinner place in my hotel tonight. It was mainly a buffet but I am watching my intake so I asked if I could order a la carte.
“A la carte ordering okay, sir.”
I elected the smoking section, lonelier still. I ordered a cheap glass of Sangiovese from a no-name label, a Caesar salad and Shanghai style pork noodles, with a side of red chili sauce.
I sat studying Mandarin lessons, talking to myself and smoking.
Maybe it’s an international conspiracy, but the xiaojie asked me at each dish, “How your food tasting, sir?”
What do you say?
Don’t all waiters say this in the US too? It always comes across oddly.
It’s an almost perfunctory question, and an analytical answer would not be warranted or welcomed. Like asking, “How are you?” or “Nin hao ma?”

But actually the Caesar salad was better than 90% of what you get in the USA. I swear. No anchovies but ample fried panchetta. And thank you for asking. I am doing well. Wo hen hao.

Then I said, “Qing gei wo kwai zi.”
She replied, “Not to worry, sir. Have your salad now and I bring chopstick for Shanghai pork noodle. ”
Excellent.
“Dui. Xiexie.”
All things in their place.
The spicy Shanghai noodles were perfect and I used all the hot stuff.
I tell the xiaojie, “Zhe cai shi hen hao. Xiexie!”
I have to say, if I could learn to cook one Asia dish, it would be the smoky, salty taste of fried Chinese noodles with vegetables and meat. Very simple.

I just got busted. The xiaojie heard me practicing Mandarin and came over to ask what I was doing, though very kindly and with genuine interest. We had an animated discussion with hand signals for word tones about my studying putonghua. She taught me a few local things. (Most Mandarin speakers can only understand a percentage of Shanghainese.)
I hear lots of spoken (and shouted) Mandarin just now in this place. That’s terrific. Though I understand very little, I still eavesdrop. I feel at home.
I ate 2/3 of the noodles and asked the xiaojie to bring me a third glass of wine.

In Shanghai it is snowing like beauty falling on busyness. Busyness and business. It rarely snows here, let alone drops this far below freezing, so tonight is special and everyone is excited in this New York City of China.
I walked back from a meeting in another hotel in the charming snow, surrounded by thousands of local people, decked out elegantly in furs and down parkas and scarves and hats and gloves and umbrellas. They were braving the harsh elements at maybe a half inch of snow and 25 degrees Fahrenheit.

I sat in the hotel lobby bar for an hour or two and worked and got a tiny bit lit on two vodka tonics. I didn’t want to go back to my room yet.

I walked out onto Nanjing Xi Lu, the very Chinese but still very western colonial era shopping street running across the waist of the city, south of Suzhou Creek. I asked where to buy cigarettes and was pointed to the streets behind the hotel. Tonight I am in love with these people out on the streets in this city, but I cannot explain this. This may be my town. I smile and they smile back, or nod, as if, “Welcome home distant cousin.” That may have been the Stoli talking.

I left the Buddies Mart and took a right, away from Nanjing Street and immediately stepped a hundred years back into old Shanghai, surrounded by shouting, laughing, smiling people, throwing snowballs, eating, squatting to talk on the street corners, smoking and endlessly going, going, going.

A hundred restaurants and small shops in three blocks. Produce stores and noodle joints with attendants in Santa suits, smiling and waving, standing at the ready. Bakeries and foot massage parlors. Walkers and bikers and scooters everywhere.
I walked and smoked.

I stopped at a place I believed was a tea shop…a place to serve tea not to sell in bulk. “A pot of tea sounds good. ”
“Wo yao yi hu cha.” One pot seemed enough.
“Shi, shi, shi. ”

I ordered longjin cha (dragon well green tea), asked where the toilet is and ordered meat noodle and meat dumplings.

This is a tiny, funky place where no one speaks English and laowai usually don’t go.

I am sitting here now, writing these notes, slurping and sipping and chomping with my kwai zi adeptly in hand, with this beautiful language on TV (I tell the nuren it’s okay, no need to turn down the sound) and only one other table of people in the place, all very loud, emoting and hollering with deep, guttural northern tones. Musical it is to me.

The wooden tea tray is very old and worn from use. The chopsticks too. The dumplings I dip into vinegar. I pour chili sauce on the noodles. The cigarettes are Chunghwa brand from Shanghai Tobacco Company. I have two teapots: One is heavy porcelain with only hot water and the other one is glass and quite small with the leaves in an internal strainer. Red lanterns hang on the walls alongside paper firecrackers. New Year can only come so soon.
No one fusses over me. The proprietor watches CCTV. People do look my way but I am comfortable and smile first. It works here. Lovely black-haired girls walk and ride bikes past my window with wool scarves and caps, elegant fur-collared winter coats and long down parkas over the top of mini-skirts or jeans, every one a passable stand-in for Zhang Ziyi. The wooden tray allows much splashing about of my cha, the custom here. Maybe I will get the Shanghai trots from noodle and dumpling, but it will be worth it.

People here make sounds we do not hear, with loud expressions and “ahhhh’s!” punctuating conversation and sudden explosions of words. Even though I do not understand it is familiar and sounds like the poetry rave performances we have only just discovered in the west.

The xiaojie takes a mobile call even as she delivers food and tea to the other table. “Wei, Ah, ah, ah..mei you, mei you….”
The team of guys in orange helmets, high wellies and heavy green coats across the street, digging up mud and laying granite blocks in the frigid air nobly continue in the cold and snow even though it is 8:30. Maybe they will go all night.

There is no heat in here and I am becoming cold. This is not Starbucks. The xiaojie brings me more hot water to fill my teapot and smiles. She is fifty, not pretty, dressed in black workers garb, but has a beautiful smile. She appreciates I try to speak Chinese words. She is here alone and takes one minute to go pee (the bathroom is crude with a hole in floor) just as the other table shouts for her. She scurries out laughing and I laugh and she laughs and the table all erupt in laughter.
Time to return to the business hotel and the other world.

I saw our dear friend Rob from Boulder tonight, in the form of a Shanghai man working the shadow streets, unrecognized by the local stock exchange, managing his tiny portion of the human economy, beautiful and brilliant, his feet firmly rooted to the old stone walkways of the city.

Liu (say: “lee-oh”) sets up every day next to the Buddies Mart where the owner asks each time as I walk in, “two pack Marlboro!” with a beaming smile, holding his thumb skyward, shouting “Obama! Obama!”

Liu sells bags of shrimps, inflates bike and scooter tires, fixes flats and who knows what else for the throngs who pedal and motor past his twenty-square-foot corner of the sidewalk every day, on a very Chinese back street off Nanjing Xi Lu, the Fifth Avenue of colonial Shanghai. This is timely for Liu, as Shanghai has become among the most vital economies in the world.

Liu is well-positioned for growth.

I came out tonight and Liu was slowly and meditatively loading his gallon water jug, ancient wooden stool, leftover shrimp, bike pump and assorted other gear into the straw basket of his three-wheeled bicycle, done for the day.

A local woman stopped to buy a bag and Liu used a centuries-old Chinese weighing stick he balanced on his fingers with a movable weight opposite the shrimps. The woman gave the bag a good sniff before agreeing, after some animated and deeply masculine Shanghainese discussion.

Liu has not shaved in a week and his grey-streaked hair is unkempt, but thick and healthy. His clothes and rubber wellies are old and dirty. A cigarette remains firmly and continuously between his teeth.
I tell him, “Nin hao, Xiansheng. Ni leng ma? Wo hen leng!”
I was cold and wanted to know if Liu was too. I used the most respectful pronoun and salutation.
Liu growled, “Uhh”, but looked calmly and directly into my eyes, without embarrassment or apology or challenge, knowing that what he does can be seen in thousand-year-old paintings considered national treasures in his country.

As far as I know there are no paintings in the Smithsonian of US sleeping bag outsourcing activities.

I return to the warmth of my hotel and after two weeks eating every regional manner of Zhongguo cai, I order the han bao, medium, with fries, longing for the taste of America’s favorite food, three blocks and one thousand years away from my friend Liu.

The ceiling of the hotel’s restaurant is an eighty-foot woven round wicker basket, smaller versions of which have long been used to toss grains in the air, perfectly punctuated with hundreds of amber LED lights, likely from Shenzhen.

Wisdom and dignity walk an ancient path, unseen by most, uncounted in the economic census, under the radar of fame and future, content with the past.

« Just A Short Drive From Here
They Took My Car Away »