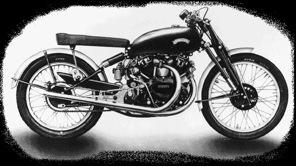 Oh says Red Molly to James “That’s a fine motorbike.
A girl could feel special on any such like”
Says James to Red Molly “My hat’s off to you
It’s a Vincent Black Lightning, 1952.
And I’ve seen you at the corners and cafes it seems
Red hair and black leather, my favourite colour scheme”
And he pulled her on behind and down to Boxhill they did ride.

“You’ve got one already, even though it is thirty years old. But maybe that’s good. You can use the exercise.”

“No, a motorcycle. Like a BMW, or a classic Indian. Triumph is back I understand. Or maybe a Harley.”

“That’s fine. Go ahead. Just make sure it comes with a new wife when you do. Maybe somebody like that bitch Red Molly from the Thompson song.”

Oops. Okay, I guess that’s not gonna work. Maybe she’s right. That Trek 5000 series is cool. But you can’t pull anybody onto the back of a Trek and make ‘em feel very special. Even if you did know where the hell Boxhill was.

Motorcycles are as ingrained into western boy culture as Levi’s and Colt revolvers and sneering. The lucky ones got into bikes early, before marriage, so the bike became a “given”, a part of the marital deal, something that partners had to find a “work-around” for. “Possession is nine-tenths of the law”, they say.

If you wait ‘til you’re fifty, you blew it. Because any damned fool knows scooters are killers. “Angel Makers”, my dad called them, and he probably rode his share in the 40’s. I mean, we have the kids to think about and a mortgage and car payments, and if Bush has his way, soon we’ll all be buying health care from a partnership of himself, Cheney, Ahmed Chalabi and Ken Lay, at a massive premium, delivered via drive-throughs.

Much has been written already about the allure and mystique of big, loud bikes; why men who haven’t grown up yet love the sound, the grease, the danger, the speed, the wind whizzing across the bald spot…

Richard Thompson’s wonderful song is nearly as good as it gets.

I won’t try to add much to that sacred litany other than that, having never owned a bike, I feel their pull nonetheless. In ’76, Roger baby-sat two BMW’s for a friend in Portland. I rode on the back, and I’ll never forget screaming through the foothills below Mount Hood in the fall, smelling the funky moist leaves and bark and feeling the rain like sheets of silk hanging from the sky.

So, I’ve had to adjust and adapt. It is worth it. I love my wife far more than fantasies of being Brando or Sonny Barger. Once I made the proper adjustment, the universe provided for me, in a most unpredictable package.

We live on a five-acre parcel in the mountains, mountains that are moist some of the year and very, very dry the rest. Fire is a constant fear, and clearing weeds and dry grass and brush from around the house is essential. We hear that if the Boulder Mountain Fire Volunteers note that you haven’t really made much of an effort to “mitigate” the fire danger to your structure, they’ll just pull up lawn chairs, bent coat hangers, weenies and marshmallows and “watch ‘er burn.”

So I whack the weeds. A couple acres worth. You gotta get on this early in the season and stay on top of it, or they’ll get too deep and too thick.

I blew out a wimpy Black and Decker model for this task before stepping up to the plate last year with a seriously badass Echo. This beast is a holy terror at 30.5 cc’s and a 17” cutting diameter. (Here’s where I get to talk about the specs and stuff, just like with a Harley). 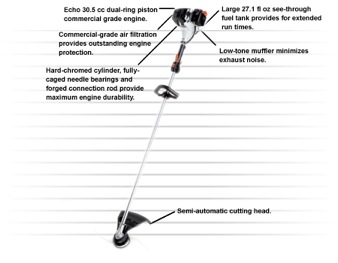 Being a guy, I couldn’t just leave the thing stock. I had to mess with it. I know you’re gonna find this absolutely riveting. The basic model comes with a line feeding system wherein you “bump” the spool on the ground and it releases another length on both sides. The 0.095 diameter nylon cutting line that came with the unit is made for amateurs, not guys like me. But the spool wouldn’t take the bigger, badder, 0.155. So, I replaced the stock spool with a “pro” spool, without the auto-feed feature. I’ve been blown away. I precut 8” lengths of this gnarly, red, licorice-looking line and manually feed them in, two at a time. They last easily ten times longer and cut like nobody’s business. And no moving parts! Fascinating, huh?

I got goggles and ear mufflers and a mask and a white, Manhattan Project-type hardhat like the one Barry Melton used to wear in Country Joe and the Fish. It’s real 50’s. I plan to put a peace sign on it, front and center, so when I’m whacking, everyone will know where I’m at, you know, politically. I couldn’t find a picture of Barry wearing his hat, so here’s one of Country Joe without The Fish, back then. He was very cool:

By the way, some dealers and users refer to these devices as “string trimmers”. Humph. Sounds like a little tool you’d use to remove a bikini.

No, I have a “weed whacker”, and when it’s time, I tell Sandy I’m gonna go whack. She usually says something like, “And when you’re finished, can you go outside and deal with the weeds?” She thinks that’s pretty funny.

My Echo SRM-310 usually starts up pretty much right away, but sometimes you have to mess with stuff like the choke, clean the air filter, prime a little gas into the cylinder, etc. You know, Cooper had a Harley. We’re about the same age and I think he got it when he became afraid of getting old too. Or maybe not, but it sounds like a good explanation. I think he had to mess with it quite a lot like I do with my Echo SRM-310.

Anyway, once you get it fired up, it’s noisy, man. That’s why the ear protection.  Sonny Barger didn’t even wear a helmet, let alone earplugs. He’s largely credited with founding the modern day Hells Angels. He lives in Oakland, and these days he speaks through a little hole in his neck. He sounds a bit like Darth Vader. I think that was caused by smoking though, not by the noise from his bike. Here’s a picture of Sonny. He is very tough: 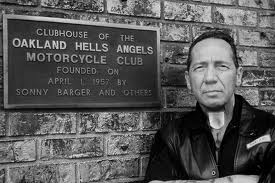 Once underway, the magic kicks in. The noise, even muffled, is deafening. The rocks and dust and bits of prickly pear cactus fly this way and that. I wear shorts most of the time and Sandy cannot fathom why in the world I don’t wear jeans and why I dig coming in for a beer after a few hours, with pieces of sandstone and wildflowers and cactus imbedded in my bleeding shins. She doesn’t understand but I bet you do.

The screaming engine to my SRM (I’ve shortened the name. Most Echo guys do this too) rests against my right forearm. Sitting here typing now, I can look under there and see a bloody pattern of sores caused by the heat and vibration, kind of a weed-whacker’s leprosy. I should wear a long-sleeved shirt, but we’ve been through that already. Sonny didn’t even wear a shirt a lot of the time. Just a black leather vest. I’m looking into one too.

Sometimes I need to take a break, but there’s no roadhouse nearby to pull up in front of for a beer, no locals to harass, no group of several dozen other filthy weed whackers standing around out front with their girls, sneering. I usually just take off my helmet and goggles, toss ‘em on the ground, spit and wipe the sweat from my brow and look out across the land. And I smile. It’s not the same as tearing across northern Arizona on a Mountain or taking a run through Rocky Mountain Park on a Harley, but it’ll do. And I get to keep Sandy.

Later on in Richard’s song, young James Adie gets into a bit of trouble. Even though he’s a Brit, he’s a biker, and at 21 years old, he’s been an outlaw since he was seventeen. Caught up in an armed robbery, the cops blast him in the chest with a shotgun. Being a tragic figure like Brando, or Franky, Joe Roberts’ brother in Springsteen’s “Highway Patrolman” he probably deserved it, but we love him nonetheless. As he lies in hospital dying, he gives Molly his bike. What a sacrifice. What a hero:

Says James “In my opinion, there’s nothing in this world
Beats a ‘52 Vincent and a red headed girl.
Now Nortons and Indians and Greeves won’t do,
Ah, they don’t have a soul like a Vincent ‘52”
Oh he reached for her hand and he slipped her the keys
Said “I’ve got no further use for these.
I see angels on Ariels in leather and chrome,
Swooping down from heaven to carry me home”
And he gave her one last kiss and died
And he gave her his Vincent to ride.

So, there you have it. My low risk, mid-life crisis. Thankfully I’ve lived long enough to tell this story and I plan to live much longer.

“Come on now, Red Molly. Jump on behind. We got some weeds to whack.”

« The Ship Graveyards of Chittagong
The Ten Thousand Guys »