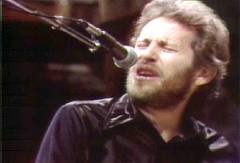 The transcript that follows is my all-time favorite description of and commentary on American music, which you know I made a big fuss about last issue. As Levon Helm (above) points out in simple country-speak, the lines that might otherwise appear to separate bluegrass, country, blues, gospel, minstrelsy and other American musical forms are real blurry, and if you listen close, you can hear the whole evolution in even a Garth Brooks tune.

Usually when someone’s here at the house for one of our extended dinners, I get a wild hair and get sentimental and want to trot this thing out on the DVD The Last Waltz.

Or worse further yet, read my poetry.

Or play a really meaningful set of historic American music on the stereo.

Playing what follows for a mellowed-out, post gourmet-dinner group is a real bad idea, as this usually occurs after some wine and stuff, and watching TV is a sure fire conversation killer and crash-inducer.

So let me share this with all of you in a way that, if it still puts you to sleep, at least you’re not a dinner guest or having to drive home. Or having to pretend you’re interested in some bullshit I wrote. Even now, you have a “delete” key. You’re safe. But read on!

Many of you know this work of Scorcese’s already, but quickly, for the benefit of those that don’t:

Martin Scorcese collaborated with The Band and Bill Graham to film the group’s last gig anywhere as a unit, at Winterland, in San Francisco, in 1976. I consider Scorcese among our finest living directors.

It’s the best concert film ever, I think, and I won’t even try to list the friends who showed up to bid The Band adieu. It’s amazing. Okay, I will: Muddy, Dylan, Neil Young, Emmylou, Dr. John, Paul Butterfield (RIP), The Staples, Neil Diamond, Joni, etc. etc. Oh, yeah, the Brits too: Ronnie Wood, Ringo, Eric Clapton and Van. Thinkin’ you oughta see this thing yet?

Anyway, the concert footage is interspersed with a number of interviews with the fellas: Marty asking questions at a rate and tempo that indicates he snorted all the cocaine when Manuel was onstage; Robbie preening for his future role as an actor but still being the eloquent historian and voice of the band that he was; Rick and Richard 120% in the bag most of the time, and you aren’t sure what was in that bag to begin with; but everyone telling their stories of the road and shitty dives with wire in front of the stage to catch flying beer bottles and stealing bologna in order not to starve, told in such a wonderful way.

Levon Helm is the exception.  I do believe many of the other band members were Canucks, save for Garth. Levon came from Helena, Arkansas, musically ground zero for blues and related forms, and given the sound of The Band’s music, being that many tunes sound like they coulda been Civil War tunes or traditional pieces from a hundred years ago, Levon comes off with the southern credibility and the real connections and the juice. The guys once went to visit Sonny Boy Williamson early on, got fucked up with him and had great stories to tell later. Chances are it wasn’t the Toronto boys who set that meeting up.

Following is Marty’s interview with Levon about where he came from:

Marty: “Well, Levon, who came from around there?”

Levon: “That’s kinda the middle of the country, you know, back there, so, a…..bluegrass or, a……country  music, when it comes down to that area and mixes in with rhythm, and dances, then you’ve got a combination of all those different kinds of music: country, bluegrass, blues music….a melting pot….show music…”

Marty:”And what do you call that?”

And Levon’s face goes soft and angelic and he smiles from ear-to-ear, with that sort of too-much-chewed-tobacco kind of facial constriction and says, with a beautiful Arkansas drawl:

What else is there to say?

« The Most Romantic Speech Ever
Pete Seeger and the Commons »