Citizen Pete and The Commons 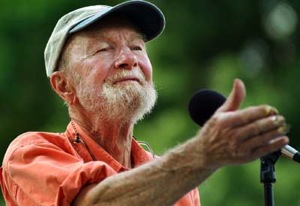 Pete turned ninety this spring and PBS covered his life in their American Masters series and then dozens of his well-known musician and activist friends came together in New York City’s Madison Square Garden to celebrate his day, including Taj Mahal, Jack Elliott, Joan Baez, Bruce, Emmylou, Steve Earle, Michael Franti, Dave Matthews, Ani DeFranco and a host of others. Arlo said of Pete and his party, “Sometimes you gotta endure the adulation of others.”

I count Pete as that most American of all Americans. Citizen Seeger.  He is my favorite singer and songwriter and a hero to me as an American, as a fine example of courage, commitment, persistence and that steadfast understanding of what being an American means. I believe being an American is to understand there is an “us” in the mix of things and to love us and be committed to “us-ness”.

Pete battled for the people, for human justice, for walking respectfully on the earth and for fighting oppression, greed, violence and drunken power. He’s done that for most of his ninety years and he kept a smile on his face the whole time. He’s still doing it today and he’s still smiling. 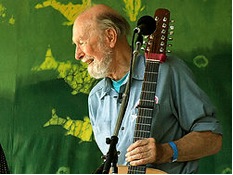 While Pete is a singer and an amazing banjo player, mostly what he does when he performs is to get us to sing, to participate, to feel each other and to find our voices and our hearts. By doing so, we viscerally feel and understand the “us” of us.

There’s an old concept of “the commons” found in Europe, Japan and the Asian continent that I have appropriated and use to my own philosophical ends. Gary Snyder refers to the commons as “the undivided land belonging to the community as a whole” and adds that this definition should also include the “traditional community institution that determines the carrying capacity for its various subunits and defines the rights and obligations of those who use it, with penalties for lapses. (Gary Snyder, The Practice of the Wild, North Point Press, 1990). Quite a mouthful.

Gary clearly is referring to land and the specific societal organizations that protect it for and from humans.

I extend “commons” to include our common good and those common tasks and responsibilities we share to maintain ourselves as a group: Schools, roads, cops, wilderness, soldiers, safety, PBS, health, the arts, free syringes and condoms,  etc.

There are a dozen explanations for what ails America these days. I am prone to simplification, so I have a simple thought about this:

Among us, there are those who believe we are intimately connected to one another and that we have inter-related responsibilities. Those people understand “commons” and they understand “us” and they desire the connections we share.

There are others who dislike this idea and expend time, energy, money and power to resist any movement toward it in the service of greed, fear and making sure things do not change. Actually, I think these people like the idea of “us” nearly as much as the idea of “I”. It‘s just that their conception of who is included in “us” is much smaller.

How’s that for gross over-simplification?

I think every other problem, whether environmental, health care-related, education, defense, race, war, the National Endowment for the Arts etc., rolls out from this tension.

This extension of the concept of the commons I nicked from Gary, but I realize I also got it from Pete, who inspired and was inspired by Woody Guthrie. 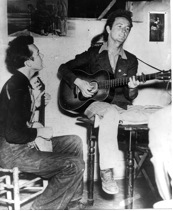 Woody’s American anthem, This Land is Your Land­, which Pete has championed for decades after Woody’s death, seems to imply this. While overtly being about the land, we do not have to listen too deeply to hear the sub-text. Woody and others were pressured to omit verses that sounded too “political” for some ears.

Pete has steadfastly insisted that we “sing all the verses” of our American song, and he always includes these when he sings:

“There was a big high wall there that tried to stop me;
Sign was painted, it said private property;
But on the back side it didn’t say nothing;
That side was made for you and me.

In the shadow of the steeple I saw my people,
By the relief office I seen my people;
As they stood there hungry, I stood there asking
Is this land made for you and me?

Apparently This Land is Your Land has leapt national borders, with variants in Canada, Ireland, Belgium, India, Wales, the Bahamas and the US Virgin Islands. Predictably, the Welsh version goes:

(This land is mine and this is yours,

From the top of Snowdon, down to her beaches,

From South to North, from Anglesey to Monmouthshire.

This land was made for you and me.)

It sounds better in the original Welsh.

McCarthy was right: Pete Seeger is a subversive.