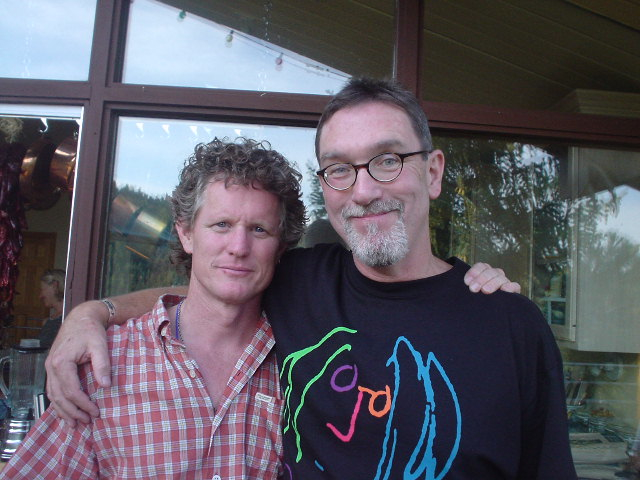 I puzzled over whether or not to publish this, but decided to go ahead. It’s very personal, but was originally a letter to twenty-six friends, most of whom are reading this now. A dear friend of ours woke up in an ambulance last weekend, and soon was informed he has a tumor in his brain. Our tribe has spent the week sharing and gathering energy, as John will go in for surgery Friday. The bonds among us are old and deep, if not also wide. Shared experiences, triumphs and defeats, loss and ecstasy, these past thirty years. This happened to the wrong guy. But the cancer has no idea what it’s up against and the tribe will prevail. If you’ve any extra influence on the universe, please send it to the Bay Area for John, on Friday. -Ed.

Our Man-Child is a fearless force of nature, powerfully centered and maniacally darting this way and that, all at once, like popcorn in a pot without a lid, or kindergartners set free at two o’clock, high on Tang. John is charmed and delighted by shiny objects, expensive writing instruments, tight asses, big ideas and soulful music. I am reminded of the one-word quote attributed to Aldous Huxley, long before anyone uttered the term “hippie”, who, after encountering hallucinogens for the first time in 1953, was prone to exclaiming “Extraordinary!” in his fine English accent, mind fully blown (before that term was coined also) at literally everything he saw. Our Man-Child is cut from the Huxley Cloth.

And that’s a good thing. Becoming jaded, as I have at times,  to the extent that we miss the details at dawn, and fail to witness life unfolding around us, is a symptom of modern life, Digi-Brain and the somnambulism that relative material comfort can bring. John notices. He may have Monkey-Mind, but that just means he’s noticing everything all the time, at once. I strive for Monkey-Mind. Babies have it. Babies smell like cookies, as I’ve said before, and you know how I feel about cookies.

Then there is the “centered” part. Maybe this sounds contradictory, or maybe it sounds like I can’t make a final character judgment about my friend. But none of us is a monolith. None of us all saint, sinner, wise-man or fool, or fixed in time and space. We’re complicated, contradictory and cannot easily be explained in PowerPoint, or Meyers-Briggs diagrams or census data.

As in a cyclone or tornado, there is a calm at the center. Over-worked metaphor as this may be, it applies to John. In the midst of that frenetic activity and sparking, sparkling attention-span we find in him calm and power and wisdom and an enormous heart. I don’t have to convince you: Consider being with John. Recall his eyes and his smile, and how well he listens when you talk. Hell, you can even see it in the image above: “I am here. Don’t even think of messing with me or my friend.” Recall how well he remembers, years later, what you said. How you have a feeling in your body that you are in the presence of someone who is present. Present doesn’t mean in control, at all.  In fact, I think the more present we are, the more we realize it’s all completely out of our control. “Extraordinary!” This is a simple thing, but nonetheless rare. We can all practice it and develop it, with intention. I think John came by it organically. It’s just who he is.

In Chinese and Japanese, there is a hanzi or character pronounced “shin” that translates as both “heart” and “mind”. Think about that. At least linguistically, there are maybe two billion humans or more who do not distinguish between the two. Meyers-Briggs do not have a nifty four-square to explain this. John may not embrace this formally, but he exudes it. Think of all of us who encounter our lives as if we were mother boards with legs, or CPU’s with a mouth, operating solely on lists and strategy and goals and score-keeping. Or others of us, paralyzed by how it all feels, overwhelmed with emotion, immobilized. Who else do we know better in possession of this artful and ever-so-human gumbo of heart and mind?

And then above I also said “fearless”. I know John is scared right now. I can hear it when I talk to him. It makes me cry as I write this, to think of him being afraid of what’s to come this week. Many men would “buck up” and pretend that having a one-inch hole drilled into their skulls to take out an alien tumor the size of a golf ball before it nearly kills you, is NO BIG DEAL. American men (among others, I am sure, but I am one of them, so I know) are taught to roll ourselves in egg batter, then flour, salt and pepper before diving into the deep fryer, so that we have a crispy, protective coating to keep our juices in. We assume others, our women partners, children and the helpless of the world, are comforted by seeing that we don’t feel anything, show any emotion, are not cowed by any threats, adversity or loss, and that we certainly are not gay. “You can fool some of the people some of the time…”. John’s juices, on the other hand are always visible, visceral and leaking out, all over the place. I like leakers. I’m one too. John’s not EVEN trying to fool anyone.

When evil knocks on my door, I want John standing beside me. His courage and dedication to his family and loved ones is incomparable, and you all know that. I know it.

John is one of the more impulsive people I know, and since I am too, we always clicked. We may both have mellowed slightly, but John could turn on a dime, give up an earlier idea, adopt a new one and be off and running, before the rest of us laced up our trainers. I understand this and I understand this is a volume, versus a percentage proposition: The desired outcome is not so much about getting it “right” a high percentage of the time, but rather getting a whole lot of “rights”. If they come with double the number of misses, we still think we won. Once on Michigan Avenue in Chicago, John impulsively had to have a very expensive pair of Mephisto shoes. He bought them, in a hurry, and after several blocks they were killing him and he renamed them his “Mc-Fist-Me’s”, but refused to go back and return them. We teased the hell out of him. Ten years later, I bought two pair. I wore them maybe three times each and gave them to Goodwill. I was trained well.

At times like that in Chicago and a hundred other places, walking down the street, in a bar or a restaurant or meeting, traveling with John, women would walk into walls, or try to light up their lipstick applicator with a Bic, or turn and completely ignore their partners. Half of you know what I mean. I know, because at those times, I was thinking, “Hey, what about me?” John can charm the Pope out of his special undies. He can get us upgraded to First Class for free. He opens doors with his brilliance and fearless peace-making. He presents no threat precisely because he shows his heart, and it is good.

So, here we all are, standing up for our favorite Man-Child, fearless and confidant. I am proud to stand next to you all. This week, filled with its fear, pain and tears, I feel you and am reminded of your strength and your beauty. A man like me could only hope to have others in his life as astonishing as John and you. How lucky I am.

Let’s rally for John this weekend. Remember him and who he is and what he means to you, then just be quiet for a few minutes. You don’t have to DO anything. Just be still and be with John.

He’s going to be just fine, isn’t he?

Somehow, all the way from Richmond, he’s got me leaking.

« Off Our Rockers
Happy Hour »