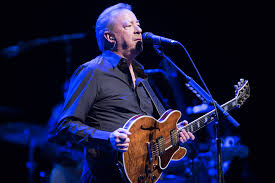 In 1977, Paul Barrere penned “Old Folks Boogie” for his band, Little Feat, included in their classic Times Loves A Hero. Apart from the deeply funky and satisfying groove, the lyrics were clever and funny, and clearly about someone else other than me and my baby boom contemporaries:

“Off our rockers, actin’ crazy
With the right medication we won’t be lazy
Doin’ the old folks boogie
Down on the farm
Wheelchairs, they was locked arm in arm
Paired off pacemakers with matchin’ alarms
Gives us jus’ one more chance
To spin one more yarn
And you know that you’re over the hill
When your mind makes a promise that your body can’t fill
Doin’ the old folks boogie
And boogie we will
‘Cause to us the thought’s as good as a thrill”

The idea of old hippies, still rockin’, still shaggin’ and still tokin’ at fifty, or sixty, or even older was remote and comical, if not grotesque. Earlier, the Congress Of Wonders did a comedy bit called “Pigeon Park” with a decidedly Garcia-type octogenarian sitting stoned on a city park bench communing with the scavenger birds in a smoky, psychotropic haze. In 1969, not only would Jerry never get old, but none of us would. That’s why it was so funny. Then Jerry died.

Then a bunch of other things happened and time passed and indeed, we all got old. How?

But many of us have not relinquished the passions and habits and diversions of those days, despite looking a little flabby and shabby in their pursuit. I remember as a kid looking at people my current contemporaries’ ages and thinking “Those guys are ancient, man. I bet they never have any fun. Look at all that extra skin!”

Sunday we left the Boulder Bubble and ventured to an outdoor music venue south of Denver to see Boz Scaggs. I have been a Boz fan since he was with Steve Miller in the late sixties, (when Steve was good) and I took Athena to see him in San Diego maybe twenty years ago, when she was ten. Boz himself is a good-looking seventy-year-old, and can still wrest soulful blues artistry from his ES 335 or Strat or Les Paul. When I mentioned our plans to colleagues at work, most young enough to be my kids, I got blank stares. I may as well have said I was going to see Mantovani or Perry Como or the Andrews Sisters.

Queuing to enter, I was dumbstruck as I looked around. I quipped to a hefty young black guy doing security duty, “Like a fucking AARP convention, huh?” He paused long enough to recall what the acronym suggested, then laughed. He either agreed and thought my comment funny, or he found it ironic that a guy like me would be making it.

The venue was a cozy size, maybe a couple thousand capacity, with well cared-for lawns, surrounded by a botanic garden. Everyone brought chairs and coolers and blankets and rain gear, and probably some other things that old folks boogie with. Signs and announcements made it clear that, while Colorado has sanctioned certain behaviors elsewhere, here in The Gardens it is strictly prohibited to doodly doodly doo. Better-than-average food trucks were on site, as well as beer and wine booths well-stocked with Stella and local brews and a passable box wine, one white, one red. That covered my range of colors.

It turned out that, in addition to several local radio stations, AARP was indeed a sponsor. You’d never have seen that at the Greek Theater in Berkeley.

Despite my advanced years, I still feel like a twenty-year-old, always left out of the adult conversations, having to “eat-off”, (as we said as kids during large Irish family meals, referring to the kids’ dinner table) and feeling certain I am acting inappropriately. (I guess Sam Kinison may have felt that way too.).

So, as I looked around at the soon-to-be-rockin’ geriatrics attending the Boz show, I thought, “Who the hell are THESE people? That two-hundred-ninety-pounder in the tie dye t-shirt…that’s just wrong. The gal in the groupie get-up should act her age.” And, “Please, please, please, don’t dance, whatever you do!” Or, “A tramp stamp at her age? That’s not cool.”

But the beer and wine lines lengthened, folks returning double-fisted, and the afternoon mellowed and people began to change. They looked better. They had a little more soulful rockin’ blues twinkle in their eye. And the music took over.

Boz was outstanding, his blue-eyed soul voice silky still, after all those years. His band backed him masterfully, and he ran his catalog from Slow Dancer tunes to Silk Degrees, Come On Home, Some Change and more than a few from his newest, Memphis. Fifty years of making people want to slow down and get sexy, right there on the lawn in Littleton, Colorado. And not an ambulance or defibrillator in sight!

Halfway through, these old Boz fans were up on their feet, gyrating, grooving and smiling. Clearly these folks do things in the privacy of their own homes that are illegal in Utah and Alabama and many other states.

I asked Sandy if she thought he’d play long, or, out of deference to the crowd (and possibly himself) cut it short so folks can be home in bed by nine. We agreed, “Hell, these guys are retired. They don’t have to get up tomorrow. Boogie on!”

Boz ended with my favorite tune, the classic Loan Me A Dime, which he recorded with Duane Allman at Muscle Shoals in 1969. For Boz, this must be like BB King and The Thrill Is Gone: “Do I really have to play this again?” A golden jackpot of an albatross, hanging ‘round his neck. But the band covered it straight up, with the searing blues guitar solos and screaming horns and all the tempo changes.

At that point in the day, I was very happy, and I knew for certain that I am indeed still twenty, and always will be.

Try and get a rise from an atrophied muscle,
And the nerves in your thigh just quivers and fizzles
So you know, that you’re over the hill
When your mind makes a promise that your body can’t fill

« What I Learned In Jerusalem
Our Man-Child: A Love Letter »