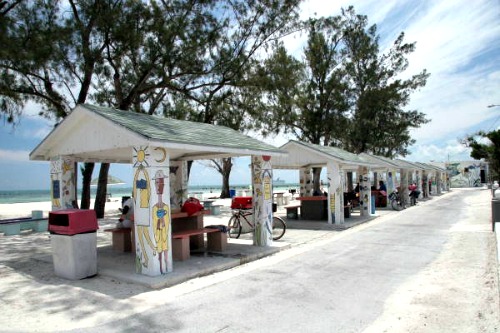 The Sixties finally and ingloriously came to its last rest today here in Key West, Florida, southernmost outpost of The Conch Republic. And, quite possibly, in a dozen other iconic locales featured so squarely in the bygone legends of inspiration, illumination, excess, piracy and idealism, such as Berkeley, Ann Arbor, Madison, New Orleans, Bangkok, and Mallorca. In this year that marks so many significant anniversaries of musical, political and social changes, from the Edmund Pettus bridge to Big Pink, from Mario Savio to the Voting Rights Act, we may finally be witnessing the last gasps of a generation only appreciated by a small, addled and dwindling fraction of those within it, one that surely left its mark, but that also utterly failed to deliver on its promise.

The end of the 60’s looks like a Holland America cruise liner docked in front of Mallory Square at sunset, one of the very most iconic and spiritual events, anywhere in the world, for those of a certain age and tribe, with the disgusting ship completely obscuring the brilliant descent of the sun into the Gulf of Mexico. In the same square, it looks like a weary elderly busker, uncannily resembling Wavy Gravy or Gary Busey’s arrest mug shot, with tie-dyed t-shirt, wild hair and beard and a stupendous top hat, holding his banjo in one hand and his leashed dog by the other, carping to the crowd about not earning enough coin to buy rubbers today, unaware that he isn’t even really providing any entertainment whatsoever, other than the preposterous gag that he would both need a prophylactic or that he could actually fill it. The leathery texture of his face tells the story of one too many or ten thousand too many excursions into the fun zone, leaving him cynical about even his own image and demeanor. His act was funny in 1972 but sad now, in 2014. The end looks like the 350-pound diabetic sixty-five-year-old in the electric wheel chair with the built-in cup holder, loading up on one more Hurricane. The scooter sports “Go Big Or Go Home” and “Give Peace A Chance” stickers. He got the “big” bit right. We fucked up the peace part.

Pirates and outlaws pioneered these places, like Key West, that long hairs later staked out, squatters we were, slathering our myths and illusions onto the landscape like butter on a lobster. Hemingway and Tennessee Williams beat us to it of course. We were a re-run or a spoiled selfie, crowding into the picture. But Jimmy Buffett and Don Henley revived the legends and mystique of smugglers with the blues and the shimmering ecstasy of constant inebriation and the lifestyle of laissez faire. Today, worn out performers on Duval Street inspire us to take it easy, over and over again, like an old vinyl record skipping at the chorus to Let It Be, with that familiar apple rotating at 33 1/3 times a minute as we stare at it somnambulistically, praying for Maslovian self-actualization.  How much easier could we have possibly taken it? We have so “let it be” that the voting rights act is being dismantled, Roe vs. Wade is endangered and climate science is trumped by press releases from Roger Ailes. We forgot about those guys in lit class in 1969, enamored of Atlas Shrugged and The Fountainhead: They turned out to have had more stamina. We got the message to let it be, to take it easy, to live and let live, to hang loose, brah, but most of us didn’t think about what came next. So now we stumble from Sloppy Joe’s to the Green Parrot trying once again to achieve lift-off to some long-remembered ecstasy, like grandpas waking after an afternoon nap wondering, “What time is it? Where are my glasses? How did I get here?”

Paul Simon long ago admonished us to look for America. The sad news is, we found it, and instead of digging in to build and strengthen it, we built a House of Blues and ordered another Sex On The Beach. This year, I resolve to do my part to lay this generation to rest, if not corporeally, then surely its myths. As those of us who played roles, lesser or greater, in the sea changes that we either caused or selfishly observed, from 1960 to 1975, finally slip into obscurity, it will not take long for our influence to disappear altogether. In another fifty years, few beyond the history departments will know or care who Tom Hayden and the Port Huron Statement were, or why Keith Moon was more than just a maniac or how Twyla Tharp changed dance. Of this I am sure. None of us can say anything about the great communal experiments of the 1800’s like the Harmony Society or Brook Farm or the Oneida Community. So why should we recall The Hog Farm or Sunburst?

We had a moment and we had an opportunity. And yes, to be fair, we accomplished quite a lot. But then we got lazy or burnt out, waved for another Mojito, and barely noticed that the multi-ton ship was blocking the sunset.

If my judgment sounds harsh, I admit to that. I have spent my entire adult life, beginning at age thirteen or so, knowing with utter certainty which team I was on and exploring every corner and nuance of our myths and rituals and history. I am saddened by how we turned out and what we failed to accomplish. My judgment is familial and earned.

So, on this New Year’s Eve of the coming of the year 2015, the fiftieth anniversary of the assassination of Malcolm X, Julie Andrews’ Oscar for The Sound of Music, Sandy Koufax’s perfect game against the Cubs, Dylan’s electric blasphemy at Newport, and, coincidentally, the creation of Medicare, I resolve to stop looking backwards, and put this thing to rest. Rather than pedaling down to Mallory Square to watch the sun set on 2014, I might just set an alarm, find my glasses, recall where I am and how I got here, and head east, to Higg’s Beach, to watch the sun rise over 2015, with no idea or concern whatsoever what will come next.

« Talking About Dominion, Reluctantly
Kaddish For The Honeybee »