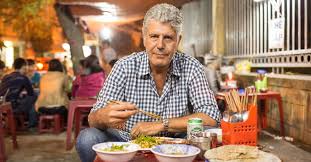 In a memoir, Anthony Bourdain shared with us that he recalls precisely the moment he decided to become a chef. While working in the kitchen of a middle-of-the-road seafood joint in Provincetown, Massachusetts, serving a large wedding party of which the bride was good friends with Tony’s chef-boss, he and his scullery mates peered out the back window to spot their boss and the bride gleefully shagging on the hood of a parked car. That was the moment.

Kitchen Confidential changed lives for thousands, perhaps millions of future foodies, budding chefs, journalists and fine diners. Regarding the latter, we learned what shenanigans go on behind the pass, which days to avoid the fish and what never to order.

Culinary academies all over the world must have boomed.

And certainly every one of us with both a gastronomic bent paired with an unhealthy relationship with drugs and alcohol was given the all clear to debauch as we deglazed.

Sandy and I took liberties with our French long before Bourdain, but it took new turns with me butchering it with, ‘I’ll get your mis en placed”. I fancied I was like a scrub nurse prepping for the brain surgeon.

Tony killed himself today and I feel a great loss. I will leave the suicide commentary to others more qualified, but I do want to appreciate him not for being a great chef, or a brilliant writer, or a successful travel journalist. He was all those. But he did something rare and essential beyond the kitchen, the biting snark or the poetic paragraph.

But before that, briefly, his terrestrial accomplishments were legion. He produced, wrote and hosted four acclaimed television series (A Cook’s Tour on Food Network, No Reservations and The Layover on the Travel Channel and Parts Unknown on CNN) winning shelves-full of awards. He made dozens of other appearances and bit parts. He wrote and consulted on the legendary Tremé, perhaps my favorite long-form drama series. He wrote seven books of non-fiction, five of fiction and two cookbooks, including The Les Halles Cookbook, one of the finest ever. Sandy’s Duck à l’Orange recipe is Tony’s.

Oh, and all that after a twenty-plus-year career running some of the best restaurants in New York: Sullivan’s, The Supper Club, One Fifth Avenue and Les Halles. To do this, he attended and graduated CIA in Hyde Park in 1978. Culinary school is high-end chef boot camp, not for the weak-hearted.

We have come to glamorize Michelin-level chefs and gourmet gastronomy in general. Bourdain helped create a lot of that fandom. But make no mistake: this is not glamorous. It is physically some of the hardest work you’ll ever do.

So, everything most of us who are not NYC diners know about Bourdain occurred after he worked his ass off for three decades, shvitzing and snorting blow, crammed into tiny, hot, disagreeable kitchens. What we know of him was his second career.

Later, he cleaned up his act, kicked his smack habit, quit smoking, took up Brazilian Jiu Jitsu and became a father. He stood up for women in the food industry and Hollywood (his recent partner was Asia Argento) and called out Tarentino for his enabling Weinstein. He championed the Latino chefs, sous chefs and line cooks who always go unrecognized in fine dining establishments.

In his new incarnation, Bourdain spoke up for the old ways, showcasing peasant food, traditional techniques, and methods used by cultures for centuries, people who use all the bits. His gastronomy was not one of privilege, but rather a celebration of humanity. We are the only species on earth that cooks.

Tony did not suffer poseurs or prima donnas. He was ruthless in his criticism of culinary lightweights such as Rachael Ray, Sandra Lee, Bobby Flay, Guy Fieri and Paula Deen. Though they are venerable in their skills and impact, nonetheless he disdained the star status of Alice Waters, Alain Ducasse and Alan Richman.

But he was generous praising real authentic talent. Because of Bourdain, I know about David Chang, Eric Ripert, Fergus Henderson, the rapscallion Marco Pierre White, Tom Colicchio and dozens of other gastronomic artists.

He was also relentless disparaging vegetarians. “Vegetarians, and their Hezbollah-like splinter-faction, the vegans, are a persistent irritant to any chef worth a damn. To me, life without veal stock, pork fat, sausage, organ meat, demi-glace, or even stinky cheese is a life not worth living. Vegetarians are the enemy of everything good and decent in the human spirit, and an affront to all I stand for, the pure enjoyment of food.” And more.

This won’t endear him much in our hip food bubbles of Brooklyn, Boulder and Berkeley, but hey, if it’s too hot in the kitchen…

But that is all gone now.

What Anthony Bourdain left us, as I mentioned earlier, is rare and essential. Surely he traveled the world and showed it to us, via the best travel program in broadcast. Yes, he explored the old food ways using fish heads, pig’s noses, nasty fermenting vegetables and funky, moldy cheeses. But Bourdain was above all else a humanist and a lover of people and all that we do. Yes, he loved the food and everything about it, but it was the people who embodied and protected those old ways he loved most.

His recent CNN series is, more than anything, a challenge to each of us to soften and warm, like a brie left out on the counter on a hot day, to let down our shields and spears long enough to notice, appreciate and love the whole of the human family.

I don’t think he necessarily set out to be a champion of humanity and a peaceful and harmonious world. It was just who he was. He said, “Skills can be taught. Character you either have or you don’t have.”

Anthony Bourdain had it.

I am sad I never met the man. He influenced me and so many others I know in ways unexpected. I take risks I wouldn’t have before. I’ll eat damned near anything that is well made. I feel justified loving In-N-Out burgers. I am probably writing this right now partially because Tony just fucking did it and did it well.

Go easy now, my friend. I will miss you.