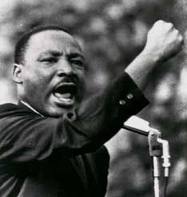 Tuesday, the Washington Post published a Bloomberg piece on Martin Luther King and the FBI’s wiretapping, surveillance and paranoia around a man they dubbed “The Most Dangerous Negro”. Certainly, in those years, rampant racism was the norm, and the expression of it, even in the crudest terms, barely raised an eyebrow in “polite society”. But so too was the nonsensical fear of communism, a political ideology that I suggest scarcely one in 100 Americans can correctly define, even today, but most all would say they oppose. There never was a credible “communist threat”, and being a communist was not and still is not illegal. Communism was the biggest read herring of the 20th century.
After World War II, “anti-communism” fed numerous egregious governmental intelligence activities, some illegal, others clearly violating constitutional guarantees. But Hoover’s and McCarthy’s out-of-control and childish panic ruled the day, and our history is tarnished as a result.
Senator Frank Church led a committee in 1976 to uncover some of the worst abuses, and these are well documented. The Post article below references the Church Committee findings.
King’s harassment by the FBI is not unique. They wire-tapped and badgered Fred Hampton (and murdered him), Mario Savio, Tom Hayden, Abbie Hofmann and thousands of other activists and opposition leaders. It’s what governments do when challenged. You do not even have to commit violence to gain their attention. Ideas are far more dangerous.
King’s idea of racial equality and equal opportunity truly was terrifying to the “grey suits” of the early sixties. It won’t be until 2027 until sealed documents are released surrounding King’s assassination. My bet is Hoover and his G-Men were involved.
Below are excerpts from the Post article.

The Rev. Martin Luther King Jr.’s “I Have a Dream” speech inspired the world. It also galvanized the FBI into undertaking one of its biggest surveillance operations in history.
Initially approved in October 1963 by then-Attorney General Robert F. Kennedy, the FBI’s wiretap and clandestine microphone campaign against King lasted until his assassination in April 1968. It was initially justified to probe King’s suspected, unproven links to the Communist Party, morphing into a crusade to “neutralize” and discredit the civil rights leader.
The speech’s impact on the FBI was first outlined in a 1976 report of the Senate Select Committee to Study Governmental Operations With Respect to Intelligence Activities, known by its popular nickname, the “Church Committee,” after Idaho Democrat Frank Church.
At a time when the nation is absorbing revelations of telephone and e-mail surveillance by the National Security Agency, the FBI’s spying on King — which had no court authorization or oversight — stands as an example of domestic security gone to excess.
“The FBI’s program to destroy Dr. King as the leader of the civil rights movement entailed efforts to discredit him with churches, universities and the press,” the report said.
It collected information about King’s plans and activities “through an extensive surveillance program, employing nearly every intelligence gathering technique at the Bureau’s disposal,” according to the report.
William Sullivan, head of the FBI’s domestic intelligence division during the King surveillance program, told the committee in 1975, “No holds were barred. We have used [similar] techniques against Soviet agents. [The same methods were] brought home against any organization against which we were targeted. We did not differentiate. This is a rough, tough business.”
Sullivan reflected the view of top FBI leaders, including Director J. Edgar Hoover, in an Aug. 30, 1963, post-speech memo entitled “Communist Party, USA, Negro Question.”
“Personally, I believe in the light of King’s powerful, demagogic speech” that “he stands head and shoulders over all other Negro leaders put together when it comes to influencing great masses,” Sullivan said. “We must mark him now, if we have not done so before, as the most dangerous Negro of the future in this Nation from the standpoint of communism, the Negro and national security.”
The speech “very directly contributes in a very major way to Sullivan characterizing” King as “ ‘the most dangerous Negro’ in the country,” Pulitzer Prize-winning historian David Garrow wrote in an e-mail statement.
“FBI officials viewed the speech as significantly increasing King’s national stature,” Garrow said, making him “measurably more ‘dangerous’ in the FBI’s view than he’d been prior” to it, Garrow said.
Sullivan’s characterization was “indicative of where the FBI’s top intelligence officers were coming from,” said Garrow, author of several books on King, including his 1987 Pulitzer Prize-winning biography, “Bearing the Cross.” And it wasn’t just Hoover, it was “an organizational culture of like-minded white men,” he said.
In an Oct. 1, 1963, memo to his field offices, Hoover directed “that we at once intensify our coverage of communist influence on the Negro.”
Robert F. Kennedy that month approved the installation of wiretaps on King’s phone and those at the New York and Atlanta offices of the Southern Christian Leadership Conference, ostensibly to look into any communist ties.
The bureau in December 1963 decided to expand its microphone and wiretap effort without telling Kennedy in “a secret effort to discredit Dr. King and to ‘neutralize’ him as the leader of the civil rights movement,” said the Church report.
The effort began in January 1964 and included installing microphones at hotels King visited.