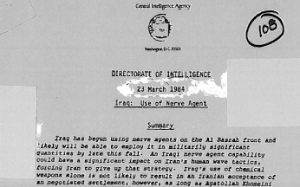 I am troubled this week. Troubled about war and needless death. But troubled all the more by the “civilized” world’s lack of any new perspective on what to do when we have major conflicts. I see us acting out ancient and very fundamentalist reactions on a global scale, that still don’t work. Recently the notion of “punishing” al-Assad and Syria for gas attacks is particularly concerning.

I understand the Geneva Conventions and that gas attacks are collectively seen as being a more heinous way to die than, say, a raging conflagration in a city full of non-combatants caused by, let’s say, “shock and awe”; or a nuclear attack on a major civilian center; or a drone strike that takes out fifteen children “on accident”. There appears to be some degree of consensus that there are “gentleman’s rules” for slaughtering each other, and another set of practices that are seen as “barbaric.”

About the recent alleged gas attacks, John Cameron was properly indignant and morally outraged, saying, “What we have seen in Syria are appalling scenes of death and suffering because of the use of chemical weapons by the Assad regime. I don’t believe we can let that stand.”

John Kerry, for his part, was also shocked and outraged. “Make no mistake: President Obama believes there must be accountability for those who would use the world’s most heinous weapons against the world’s most vulnerable people. Nothing today is more serious, and nothing is receiving more serious scrutiny.”

I am outraged as well. At the Syrian gas attack, the genocide in Darfur, the illegal US attack on Iraq ten years ago, drone strikes that kill civilians, bombs that stray off-target, Hiroshima, etc. All horrible.

But all Kerry and Cameron and others can come up with in response is to consider bombing Syria. “They must be punished!”

Can’t we come up with anything more creative or effective? What do we do the day AFTER we bomb Syria? Can we conclude we will not have collateral deaths in Syria? Haven’t we created quite enough jihadis by attacking and bombing the mid-east third world? What do we expect the Syrian’s response to be? No one believes they will be repentant.

Thirty years ago, another president, Ron Reagan, looked the other way when our ally in Iraq at the time, Saddam Hussein, gassed the Kurds, who were siding with the Iranians, because winning the war against Iran trumped civility, and, incidentally, the Geneva Conventions. Except Reagan didn’t do it himself. His surrogate Hussein did, so Reagan was at arm’s length.

This week Foreign Policy published some of the recently declassified CIA documents detailing this US atrocity:

“The U.S. knew about, and in one case helped, Iraq’s chemical weapons attacks against Iran in the 1980’s, according to recently declassified CIA documents obtained by Foreign Policy. Their detailed timeline, also constructed with the aid of interviews with former foreign intelligence officials, indicates that the U.S. secretly had evidence of Iraqi chemical attacks in 1983. The evidence, FP writes, is “tantamount to an official American admission of complicity in some of the most gruesome chemical weapons attacks ever launched.”
Ever since last week’s devastating evidence of chemical attacks in Syria, analysts have looked for benchmarks to predict the U.S.’s response. On Sunday, a U.S. official suggested that the U.S. is moving closer to possible military action in the country as the U.S. has “little doubt” that an “indiscriminate” chemical attack took place. Officials are reportedly looking to the 1998 air war on Kosovo for a precedent — a similar humanitarian crisis in the face of virtually no chance of a U.N. Security Council resolution to authorize use of force, thanks to dissent from Russia. And while Foreign Policy’s additional reporting places the Iraq situation in contrast to today’s debate over Syria, the details reveal just how sharply, in the past, the razor of U.S. interests in the Middle East has cut: “it was the express policy of Reagan to ensure an Iraqi victory in the war, whatever the cost,” the report explains. And apparently, that went up to and including helping Saddam Hussein gas Iran.”

My point is not that gassing citizens is morally right. Of course it’s not. I do squirm at the moral indignation of two, maybe three (with France) nations who have a bloody CV in their histories when it comes to war and war crimes. We have no legs to stand on.

The world should be outraged. At any conflict that turns violent. But the world really needs peacemakers, versus war makers. The tired old testament remedies of “an eye for an eye”, guilt, shame, punishment and sanction are worn out, and they frankly never worked.

So Mr. Obama has a chance to steer another course, despite political expediency and John McCain’s bellicose baiting from the cheap seats.

I hope he has the wisdom to try something new.