Ahh. The venerable bird, that ancient gesture of abandonment of civility and any pretension of effort to understand the other. “Fighting words”, as it were, in one finger.

Let me preface these brief remarks by saying that by no means do I recommend any of us traipse about our lives flipping one another off. Doing so crosses a line that most of us do not intend, and one that is very difficult to retrace.

But personally, I think about decisions and choices in terms of a continuum of possibilities and outcomes, best to worst case in other words. Intellectually experiencing the worst case makes pursuing the better easier. I am prepared.

And, full disclosure, I have in fact flipped the bird. I regret every instance. Never did doing so improve relations. Momentarily I felt righteous and my sense of injustice was briefly sedated. But no good outcome ever resulted.

Further, in these times of utter social and political polarization, what is required of us is more patience, more listening, more empathy, and less ad hominem attacks, less Facebook rants, and yes, less birds.

So, with those caveats let’s move on. But be nice to one another. Spoiler: this is intended to be comedic. It’s getting bad when a writer has to say that.

As a contingency, flipping the bird deftly is something to keep in one’s vest pocket for that rare time one thinks it warranted, after careful self-evaluation and thought. We’ll get to the “how to’s” in a minute.

But as a sideline, it’s worthwhile to explore the history of this “bird” and prepare to at least use the damned thing properly and with respect to its cultural primacy.

Flipping the bird has deep roots. Most sources credit the ancient Greeks with originating the bird, though likely they were merely there for the first public recognition of the flip and cave people had been doing it for millennia, having found a pre-verbal means to exclaim, “Keep your grubbers off my leg o’ mastodon.”

It is recorded that when strangers at the inn were expressing their wish to catch sight of the great orator Demosthenes, Diogenes stuck out his middle finger and exclaimed, “This, for you, is the demagogue of the Athenians”. Take that, strangers. Up yours. In Greek this gesture was called katapygon, or roughly the combination of “downwards” and “rump” or “buttocks”. I get it.

We see the bird appear in Aristophanes play The Clouds in 423 BCE. Socrates is pressing Strepsiades on meter in poetry and the latter pushes back, saying he knows well what a dactyl is and flips off Socrates. We’ll step back from explaining this double entendre, leaving it to the classical poetry scholars. But being there must have been a laugh-riot.

Within what is termed the “Classical Era” of the bird, there is far too much detailed history to include here. But I will add that the Latin digitus impudicus meant “shameless, indecent or offensive finger.” Pretty much.

Fast forward a couple thousand years and we see the bird showing up in US baseball in 1886. There’s a photo of Old Hoss Radbourn of the Boston Beaneaters flipping off a player from the New York Giants. Frankly, as an Irish descendant with brief family roots in Boston, “Beaneaters” should have prompted pugilism. 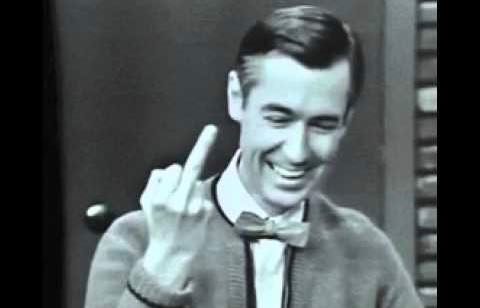 In more modern times, flipping the bird has become storied and ubiquitous. I mean, Fred Rogers? Among the esteemed luminaries using this weapon of rhetorical war on camera are Nelson Rockefeller, Pierre Trudeau, Abbie Hoffman, Reagan of course, George W Bush and Anthony Weiner and dozens more. Go ahead. Have fun with that last one. Sports stars and musical icons have used the bird liberally, far too many to list. Famously, Dick Cheney, the Vice-President of the United States, while in the hallowed chambers of the Senate, cut right past the finger and told Patrick Leahy (D-VT) to go fuck himself while on a hot mike. Cheney was always a “can do” kinda guy. 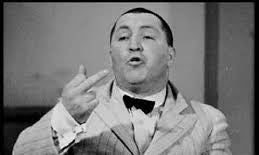 I suggest that the image of Reagan above is very nearly the gold standard of bird flipping. Not quite the Miles Davis but close. It’s hard to be offended by Fred, because we all love him and he is smiling. Curly? How can you not laugh at anything Curly does? He may as well be saying, “Fuck me.”

But I suggest Ronnie was really close to perfection, with a few adjustments I will suggest below. Ron had the right facial expression. If you do select this “nuclear option”–to use parlance from our current US Senate–this digital “up yours”, the face must match the bird. Otherwise you confuse your opponent and open the door to ridicule or worse.

So, allow me to suggest a few guidelines:

But remember, dear citizens, this is a contingency. Avoid it at all costs. Keep Vonnegut top of mind: “Love may fail but courtesy will prevail.”