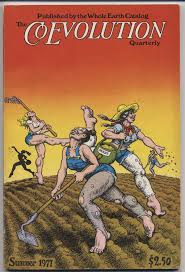 I have always been a newspaper and magazine geek. I loved Geographic as a kid, if only for the stunning images. Life and Look were early staples at home in the sixties and were surprising in their honest coverage of the radical changes rocking America then. I had a window seat into that tumultuous landscape until I was old enough to drive. Time and Newsweek were always around our house. I subscribed to Ramparts in high school and it was a pipeline for both radical thought and good journalism. Rolling Stone announced that we had arrived.

CoEvolution Quarterly had a profound influence on me from its inception in spring 1974 through to the end of its storied run, ten years later. CQ was the brain-child of Stewart Brand and a band of highly educated, counter-culture visionaries, hard and social scientists, mystics and boat-rockers, many of whom went on to change the world in varying ways. Stewart still lives on a barge in Sausalito where much of this action was centered. This group included many who were not only at the flashpoint of the digital revolution, but perhaps helped cause it.

Art Kleiner, one of CQ’s editors, said of the publication, “The list of ideas introduced to (or reframed for) a popular audience by CoEvolution Quarterly is immense: The Gaia Hypothesis, watershed consciousness, voluntary simplicity, personal computers, flat taxes, the effects of chemicals on the human gene pool…”

CQ’s statement of purpose read in part, ”We are dedicated to demystification, to self-teaching, and to encouraging people to think for themselves. Thus, our Motto: ‘access to tools and ideas’…We recommend rather than attack…We change with the times that we help change…We update ourselves continually…We’re not a ‘political’ magazine…We are deliberately eclectic.”

Stewart Brand founded the Whole Earth Catalog in 1968, an essential possession for those seeking intimate connections with work, land, building, playing, environmental learning and sharing. As so many were fleeing the cities for deeper connections and stronger community, going “back to the land” as we said, we needed support, information and, as the Catalog promised, “Access to Tools”.

Those of us stuck off in remote and conservative corners first heard of the bold new communes in northern New Mexico and southern Colorado through the Catalog, young people totally unplugging and making it work, albeit temporarily, building domes and growing food.

Many who had copies of the WEC may still be unaware there is a novel contained inside. Gurney Norman spread his work, “Divine Right’s Trip” across the lower right-hand corner of the Catalog’s 448 pages. It’s a good story.

Steve Jobs likened the WEC to Google in a 2005 speech, saying, “When I was young, there was an amazing publication called The Whole Earth Catalog, which was one of the bibles of my generation…. It was sort of like Google in paperback form, 35 years before Google came along.”

The Catalog’s most famous image graced some of its covers: 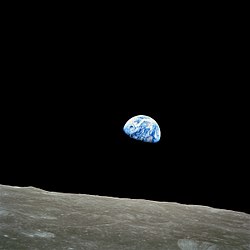 This was the first time most of us realized where we were. This image changed everything. “Here” was never the same.

Stewart Brand was an army vet and a Stanford-trained scientist. Before LSD was illegal and the CIA were dosing all the wrong people, he participated in one of their experiments in Menlo Park. Later, Brand was “on the bus” with Ken Kesey (also a contributor later) and the Merry Pranksters. Thanks CIA. We couldn’t have done it without you.

The Catalog ended regular publication in 1971, though numerous special editions followed. Here’s my forty-seven year-old copy of that last issue, opened to an entry reviewing a book by a theoretical mathematician about order in space: 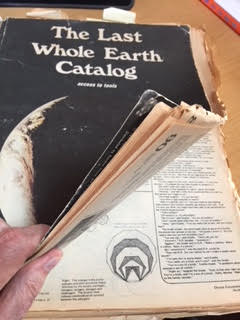 The Catalog was CoEvolution Quarterly’s daddy.

CQ followed the Catalog, starting in spring of 1974, publishing forty-three issues until fall of 1984. I owned them all until I foolishly dropped them at a hippie free store somewhere. 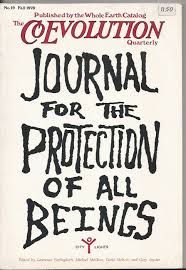 CQ opened its doors to guest editors who occasionally took over the magazine, ranging from the Black Panthers to City Lights Books to Gregory Bateson and Margaret Mead.

As the digital revolution began in earnest, CQ was at ground zero. (Kevin Kelly, a regular contributor was an early editor for Wired Magazine. His story is worth an entire book. He founded the first hacker’s convention as well as the Linnaean Enterprise that set about cataloging every living species on earth). Articles began to appear about systems and networks, watersheds and bio-diversity and something called personal computing and virtual communities. Remember, this was the early eighties.

Brand and Kelly, out of their WEC and CQ work, founded The WELL (or Whole Earth ‘Lectronic Link) one of the first and oldest virtual communities, when most of us, certainly not I, had any idea what that was. It functions yet today.

Apart from being a personal nostalgic stroll, I offer this look as a piece of our recent history and an invaluable influence on how we got here. The Whole Earth Catalog, CoEvolution Quarterly and the Whole Earth Review that followed helped make hippies smarter.