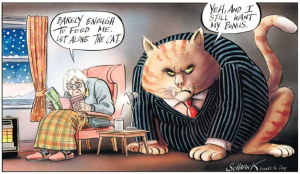 What motivates individuals and groups is much simpler than we often portray. Our choices and biases, goals and fears are often right at the surface of risk, reward and aversion. Sometimes, because of those motivations, we as individuals or groups have an additional motivation: to try to mask what really is driving us, while contriving much loftier-sounding rationale than mere self-interest or greed.

→ What is the medical industry’s motivation for any or all of us to be well? In fact, it would be reasonable they need us to remain sick and to even become sicker. Cancer, high blood pressure, diabetes, depression are obviously huge industries.

→ Eli Lilly and Merck and the rest of the Big Pharma companies will not benefit from old, herbal remedies that actually work. They are hard to patent, they are ubiquitous, impossible to “corner the market” on and a threat to earnings. In fact, Big Pharma would naturally have a motivation to squelch any upstart in the herbal medicine world, legally, legislatively, or in more sinister ways. Similarly, they have no motivation to fully test new drugs before releasing them on us. The margins are enormous on drugs, and it is simply cheaper for them to pay off suits than withhold a new drug until it is proven safe.

→ Xcel Energy in Colorado has been accused of efforts to stymy the growth of solar energy generation, through lowering rebate rates and other tactics. Solar makes up less than 1% of their energy platform, but still, it cannot be controlled easily, is abundant and ubiquitous, and free, after citizens make a capital investment. This does not bode well for their shareholders. Isn’t it natural they would go to extreme lengths to stop such a threat, despite its overwhelmingly beneficial promise for the planet?

→ I mean, really. This is way too easy. Which oil company benefits from automobiles that get 100 miles to the gallon, or run on electricity, or worse yet, solar energy? Is bribing a senator or a vice –president such an outlandish thought, given the bounty at stake?

→ Is buying a house REALLY this complicated? Or is the real estate profession a protectionist club that benefits from making a transaction arcane and scary? Instead of the six percent commissions, isn’t it possible to make the buying and selling safe and simple? Couldn’t an attorney do it for 1% in a day or two?

→ And what about the insurance industry? Who can blame them? They are sitting on a golden egg. We give them premiums monthly, or quarterly or annually, for our houses, our cars, our health and our lives. They get this money quite easily, really. There is no “cost of goods sold” yet. Until there’s a claim. Isn’t it human nature to not give up one’s winnings easily? Is it so outrageous that they give us difficult to understand claim forms and rules, deny or delay payment, disqualify pre-existing conditions and make communication with them next to impossible? Isn’t it natural to spend hundreds of millions of dollars to buy elections and influence public opinion to get citizens to fear something as simple and good for us as national health care?

→ And poor Wayne la Pierre. Everybody is on his case. He earns over a million dollars a year, speaking out for the NRA and its ideas (and not necessarily its membership). A great gig. If he were to begin losing ANY ground whatsoever, that big-buck-nut may be at risk. I am sure he is motivated by his ideals. But who can ignore earning  One Unit annually? I might be hard pressed to entertain even the most reasonable discussion about keeping us safe from gun violence, were I in Wayne’s shoes.

→ Ten million Americans have been displaced from their homes by foreclosure in recent years. Zero Wall Streeters have done any time around this scandal. I can’t really blame them. We have a banking system that controls our government which crafts the rules that allow big banks to win. The only problem is the people lose.

But whose fault is all of this? I don’t think we need greed, but we love it and it is our highest public value as a people. It trumps society, learning, compassion, wisdom and clear thinking about long term survival.

On a personal level, in Christian terms, greed is merely a sin. Allowed to run amok in a society, it is a deadly epidemic. As with any epidemic, treating symptoms is not effective.