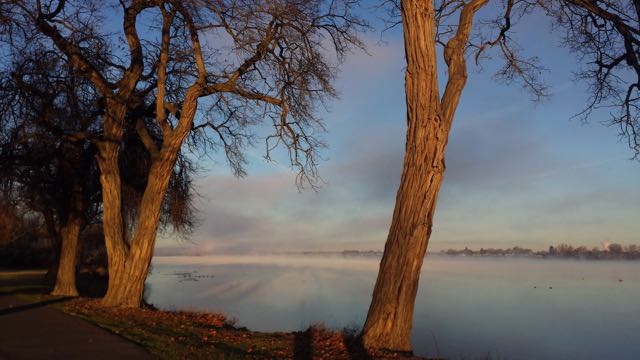 (Editor’s note: My dear friend Barbara and I have known each other close to fifty years. We both come from that part of the Washington desert where nuclear waste lies in toxic holes in the ground, one of the nastiest places on earth. Barbara lost her mother in late 2016 and the synchronicity of adjacent events put a poetic point on her life. Barbara is one of my favorite poets. She gives voice to time and place and spirit, out past the realm of right angles.)

We’re walking in a place where the

So dry the dirt burns

And the evening sky appears as a fresh bruise

Here on the banks of the

The west of North America

That has begun to drink in and crystalize carbon

Deepest time to the edge of the universe

That this is a temporary madness

It has happened then and will again

An embedded story of immense floods of lava and ice

Deep time along the western rim

Singers and musicians began with poems and ended with Agnus Dei

In the desert rain is scarce and tentative

Yet for her passing the local headline read

The most recorded since 1947

Then The Election happened

And that day Leonard Cohen left us

“Ring the bells that still can ring.
Forget your perfect offering.
There is a crack in everything.
That’s how the light gets in.”

The world has ended

But stop for a moment, before you go, and listen to Patty Smith sing

He sends his regrets