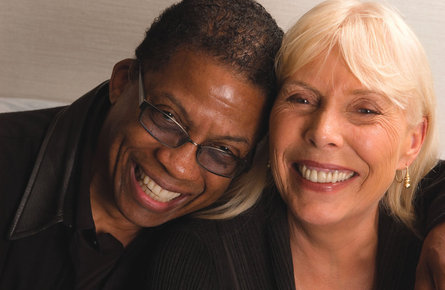 A Case of You

“One of the greatest experiences I ever had was listening to a conversation with Joni Mitchell and Wayne Shorter. Just to hear them talking, my mouth was open. They understood each other perfectly, and they make these leaps and jumps because they don’t have to explain anything.”

Jazz artists have covered popular tunes for as long as jazz has been our first American religion. In the last few decades, I have enjoyed popular covers by Pat Metheny, Hank Jones, Chick Corea, Keith Jarrett, Charlie Haden, Bill Frisell, and of course, Miles Davis.

In his Grammy Award winning 2008 recording, River: The Joni Letters, Herbie Hancock  pays proper homage to Joni Mitchell, who bridged her musical divide from the popular idioms to jazz decades ago. I saw her in March of 1974 at Dorothy Chandler Pavilion in Los Angeles with Tom Scott and the LA Express, with the amazing Scott, Robben Ford, Max Bennett and John Guerin. It felt like I had a ringside seat as Joni moved from one musical world to the next.

Herbie assembled a fine team of musicians and brought in a blue-ribbon group of vocalists, including Corinne Bailey Rae, Leonard Cohen, Norah Jones and Tina Turner to honor some of Joni’s brilliant catalog. For tunes, he reached all the way back to the early days with River and Case of You up through Amelia and Edith and the Kingpin.

Case of You stands out for me, and, at times, has been on repeat for days or weeks here.

I use this recording as therapy, or a psychic salve or a spiritual “reset button”.

Joni’s version, written in C Major and accompanied by her with simple, syncopated, chorded strums on dulcimer, is fairly approachable by singers and guitar players, though her vocal phrasing is beyond the reach of most vocalists not named Diana Krall.

Herbie’s version of this beautiful song showcases himself on piano, Wayne Shorter on soprano sax, Dave Holland on bass, and Vinnie Colaiuta on drums. Herbie calls to us, siren-like, from the outset, with his piano chord-blocking that familiar staggered “strum” that is part of my cultural DNA. He plays the first verse-chorus round single-noted and straightforward. The second, true to jazz style, veers and strays, but we never lose the melody. On bass, Dave Holland leads us to Wayne’s impressionistic, contrapuntal sax break as Herbie slides in beneath him to take us out of the second round. Wayne’s playing on this tune is breathy, lithe and cloud-like. Holland then resets the bottom and Herbie soars on piano, the essence of jazz piano. Throughout, Colaiuta taps the softest rhythms, like cat feet on a tightly fitted bottom sheet.

We know Joni’s lyrics as well as any, so their unspoken, instrumental implication is perfect. The vocal interplay of sax and piano speaks those words, or rather, speaks the feelings Joni captured so well as one of our very best popular poets. We feel her grief and the familiar urge to run away when she sings, “Just before our love got lost, you said, ‘I am as constant as the northern star’ and I said, ‘Constant in the darkness, where’s that at? If you want me I’ll be in the bar.’ “

Often, I hear that the blues, the skeleton within jazz, makes people feel sad or forlorn and “Why should I have to feel that way? I want to be happy.” Joni, Herbie and Wayne answer that question, showing us that to feel, to move forward, no, even to be alive, we need to be what we are, be what is happening to us. “Feeling bad never felt so damned good!”

I love this tune. I love this entire recording. It is truly a love letter from Herbie and Wayne to Joni Mitchell, our national treasure.

Take two listens and call me in the morning.

Tell me how you feel.

« Remembering The Desert
Geoff at Changcheng »